This isn’t a review. I largely enjoy the Fraction/Larroca Invincible Iron Man. It’s a high quality example of a comic of its type.

What I’m trying to think through here is whether or not I want to keep readings comics of its type; or, rather, camshd if it’s type has changed from something that I really like to something that I’m more lukewarm about.

When the news went forth that Casanova scribe and Mountain Goats fan Matt Fraction would be writing a new Iron Man series, I was tremendously excited. I’m a big fan of his independent work and his work for Marvel, including The Order and, with Ed Brubaker, Immortal Iron Fist. Though I cherish an affection for the character, missalice_94 I had not followed Iron Man’s exploits on a regular basis since around the time of the second Micheline/Layton run.

But Fraction, I thought, was just the guy to bring me back to the title. And indeed! The first arc of the new series, which pits Tony Stark against Ezekiel Stane in a clash of contending futurist ideologies, was outstanding visit.

It maintained the style and wit that made the film a hit, and it offered a thoughtful new take on what makes Iron Man interesting beyond the superficial “Tony Stark is a futurist” characterization that had become common—simply by thinking through the implications of that characterization. Being a “futurist” isn’t about prediction hit, Fraction knows: It’s about fighting to bring about your particular vision of the future, which is only ever one of the thousands. Anyway, it was good and you should buy it.

And then some stuff happened to Tony Stark in a boring company-wide event crossover comic that I didn’t read. The book’s focus shifted to the current “World’s Most Wanted” arc—with Tony accused of treason and on the lam from the newly ascendant Norman Osborne. And hey: I’ve enjoyed the issues in the latest arc, too. Check trumedical.co.uk.

Fraction depicts Tony as resourceful, reckless, and a little rascally, and he’s doing some interesting stuff with the supporting cast.

And yet . . . something about the latest issue (#11) gives me pause. The pieces focusing on Maria Hill going up against an old Iron Man foe and on Pepper Potts in her own suit of armor work well; it’s nice that someone is writing women in an Iron Man comic as something other than (or at least in addition to) conquests for Tony.

Yet I’m getting the sinking feeling that, rather than getting to put his own distinctive stamp on the character, Fraction is having to mark time until the next boring company-wide event crossover comic that I won’t read. That anything interesting that’s going to happen to Iron Man is going to happen to him there instead of in his own comic and will go according to someone else’s plans.

I think my worries were sparked by this issue’s big battle between Iron Man and his former partner War Machine—a battle whose utter pointlessness is actually an overt part of the story. (I think Fraction is shrewd enough to be doing this on purpose, a la Morrison’s characterization of Magneto’s confused, pathetic world takeover in Planet X, which at this point for me only ameliorates the problem a little, though I may change my mind depending on how things play out.)

The story’s cliffhanger involves another former ally being sent after Stark, and my worry is that it’ll be like this one—stylishly rendered, smartly choreographed, and kind of empty.

Which is an odd thing to complain about in a superhero book, I know. But to clarify: what I wanted to read is Matt Fraction’s version of Iron Man. What I’m afraid we’ll be getting, more and more, is Matt Fraction’s scribbling of his Iron Man in the shrinking margins of Corporate Crossover’s Iron Man stories.

Now, I know the reaction many people will have: “Oh Prof, so naive to think that superhero comics are ever about meaningful change, that any corporate superhero tale ever ends any way but with a return to the status quo. Should we tell you about Santa or would that totally wreck your week?”

The notion that all change is only an illusion is a comics blogosphere commonplace, but it’s not actually true. As Gorjus and I were talking about back on Spanish Town weekend, long-term changes are possible, if not common.

I’ve got a long box full of Messner-Loebs and Waid Flash comics that chart Wally West’s evolution from spoiled man-child sidekick to hero all whilst deepening the mythos of a Guy who Runs Fast in unanticipated ways, and another box full of Hulk comics in which Peter David, over the course of years, reveals theretofore unseen dimensions of the character and creates the possibility to do an enormous variety of new things with him.

That these changes are either in the process of being undone or generally ignored doesn’t really undermine my point:

Those were long, sustained runs, driven by the vision of individual creators, in which those creators were given the leeway to do their thing, and the larger shared universe would respond (rather than the other way around—and until the heavy hand of editorial fell, for Peter David, at least).

Perhaps it’s silly to want these things from a corporate-owned property anymore, but I don’t want to think so. (And Ed Brubaker’s run on Captain America would suggest that it’s not impossible, though we’ll see how he ends it.)

Anyway, as I say, this post is about thinking through this issue, not about justifying a decision to dump the book: I’m not dumping the book.

I like the book. I like the B-stories (though I’m tempted to refer to Tony’s story as the B-story here), and the surface of Fraction’s scripts still crackle with energy; but I’m sensing less of the depth and resonance that was evident in any given issue of the first arc.

I hope I’m wrong; I hope I’m just indulging in the typical comics blogosphere knee-jerk pessimism over the perceived faults of a single issue in a much larger storyline. I hope that when all is said and done, Matt Fraction’s Iron Man is the one whose adventures will have been dominating the book all along. 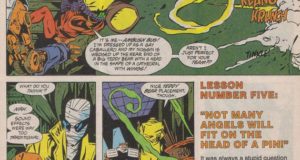 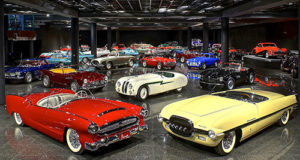 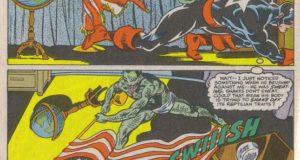